“The person is free who lives as they wish, neither compelled, nor hindered, nor limited—whose choices aren’t hampered, whose desires succeed, and who don’t fall into what repels them. Who wishes to live in deception—tripped up, mistaken, undisciplined, complaining, in a rut? No one. These are base people who don’t live as they wish; and so, no base person is free.” —EPICTETUS, DISCOURSES, 4.1.1–3a

2016 was the world travel year. Towards the end of last year, I was beginning to dislike flying. I got sick of hotels, of serviced apartments, of “needing” to be one place one month, and another place the next: I had overcommitted. I took at least one flight 11 months out of 12. I flew over 25 times and visited 7 countries. I was away from home for 8 months. Was I lucky? Yes. Privileged? Sure. Were there negative consequences? Plenty.

As I worked increasing hours, changed timezones every month, and began to say “Yes” much more than “No”, my mental health became more fragile. I started becoming more anxious and stressed, noticing some physical sensations such as a light tingle around my left eye, sore shoulder and neck muscles, or waking up with a headache most days. I became irritable, lost my ability to think clearly, or be creative. I wasn’t the best version of  myself, and it felt terrible.

Once I got back to Melbourne in November I threw myself into tackling the problems. I started to meditate everyday, I started reading more books including Stoic philosophy, following a regular sleeping schedule, trying to understand stress, anxiety, and what was on my mind. Ultimately though I was trying to scramble out of the hole too late, I needed a real break. I went off to SE Asia, took 3 weeks off work over Christmas/New Year in KL and then headed off to the beach at Boracay with Wen. 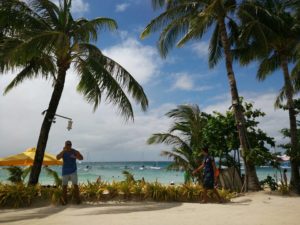 It helped. After a couple of weeks of my break, I began to get back my energy. My headaches disappeared, I could think clearly again. I began reading business books and planning for the year, I was excited.

As I arrived back in Melbourne I was ready to go and jumped right back into it. 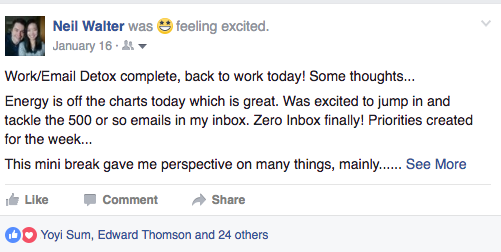 Just under 2 months later as I write this, I’m still traveling along reasonably well, but wanted to offer a few additional thoughts which have come up recently. Firstly, as expected the stress and anxiety has crept back slowly. If my energy was 3/10 at the end of last year, I’m a 6/10 right now, but I was a 9/10 just 2 months ago. I believe the decline is due to the inconsistency of some of the healthy habits I put in place, specifically the daily meditation (not being every day), challenging negative thoughts (sometimes but inconsistently), putting space between my life and business (very difficult as an entrepreneur), supplementing when required (surprisingly, I’ve actually found more consistency when not supplementing much outside of the basic vitamins and minerals. I have got certain supplements and nootropics which do a great job at putting me in a certain state of mind, but sometimes have some side effects, so I’m not using them too much.), plus, not working more than 8-10 hours a day, 5/days a week is important for work/life balance.

My hypothesis is that if I was to keep up my habits consistently, and spend plenty of time away from work, I would be able to work towards a 8 or 9 out of 10 again on a consistent basis.  It would also help to introduce relatively consistent exercise to burn off the excess cortisol. I also need to learn to put space between my life, my business, and my thoughts.  I think most entrepreneurs would agree when I say that it’s very hard to switch off your mind from your business.

What I’m beginning to realise as I venture further into my reading of Stoicism and deeper into my meditation is that I have a very long way to go. Perhaps at just 29 years old, I’ve already achieved many things which I should be grateful for, and shouldn’t expect too much more just yet? I’ve realised that my mind is far from where it could be, and I think identifying that gap is important. Specifically, I’ve realised that creating some order and consistency through habits, and “space in the mind” is going to enable me to become more fulfilled, less stressed, and be able to provide more value to others which is my ultimate goal.

Although society tells us that we need to work stupid hours and “hustle” to be “successful”, I think success should be defined on an individual basis.

“The person is free who lives as they wish, neither compelled, nor hindered, nor limited—whose choices aren’t hampered, whose desires succeed, and who don’t fall into what repels them. Who wishes to live in deception—tripped up, mistaken, undisciplined, complaining, in a rut? No one. These are base people who don’t live as they wish; and so, no base person is free.” —EPICTETUS, DISCOURSES, 4.1.1–3a

Epictetus, originally born a slave who became one of the most sought after Stoic philosophers was questioning how free we really are? Beyond our core obligations such as work or family, how many obligations do we have that are self imposed? Such as needing to keep up with vanity and buying the latest iPhone, or needing the dopamine hit of likes from Facebook each day?

I’ve reached a point where I don’t need that much. I’m not a minimalist by any means, but I only own half a dozen or so physical possessions beyond clothes. I prefer to spend money on experiences, and higher quality things. I like to travel and spend time with friends and family.

For my business, I’m realising that I can only work with a finite number of clients, so I’m better off making those projects as impactful as possible, creating a large upside which the client and my business can share in. The business is profitable, but I’m constantly needing to make sure I’m not taking on projects just because I can if they don’t fit my long-term objectives even though it might result in more money in the bank.

I’ve realised that helping others is something I really enjoy. I’m committed to mentoring at least a couple of young people each year, training them, and teaching them as much as I can, and then hoping they go into the world and make an impact on other people and start their own organisations.

I’ve spent a portion of the last six months thinking about “Financial Independence” and the concept of early retirement. But now I’m beginning to realise that I’m not trying to escape from a cubicle or job I hate. I love my work, I can’t imagine doing it forever, but the goal is not to to retire early. It’s to have many mini retirements throughout life, and have enough cash buffer to get out of an undesirable situation if the shit hits the fan.

The reason I wrote this post, and the message I wanted to convey is that you do have a choice. A choice to be better, to upgrade, to dig yourself out of debt, or change career, start a business, get out of a shitty relationship, or whatever might be negative in your life right now. If you step back and take inventory of your obligations, you might see many of them are self imposed and not even necessary. If you take time to examine your thoughts, you might begin to realise that there are lots of beliefs and negative thoughts that are doing nothing to serve you and are just holding you back.

What I’m realising though is that while you have a choice, you really need to put in the work to upgrade. If you do put in the work, you’ll begin to peel back the layers of the onion, become more aware, and perhaps you’ll start discovering things which you were not even aware of. It can be painful at times, but if you’re able to create more value for others, it’s worth it.